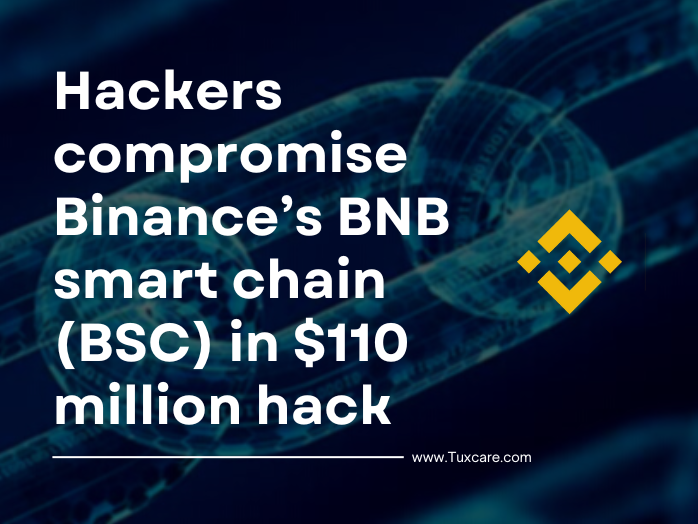 Hackers compromised Binance’s BNB Smart Chain (BSC) and stole an estimated USD 110 million. Hackers were able to get their hands on as much as $110 million worth of coins and transfer them out of BSC, while a further $429 million remained in the BNB wallet.

Analysts pointed out that the hackers successfully exploited a flaw in the bridge’s verified proofs that allowed them to forge approval messages and deposit the money into their account.

To execute the attack, the attackers exploited a security vulnerability in the Binance Bridge (BSC Token Hub) before exploiting a verification proof vulnerability within. This allowed them to mint two million BNB on the BSC chain to the address.

The incident was the result of a vulnerability in a cross-chain bridge that is increasingly becoming an access point for attackers. Attackers were able to exploit a vulnerability in the Binance Bridge and sent 1 million BNB tokens twice in a row. The hack was made possible by a flaw in the Smart Contract that allowed hackers to forge transactions and transfer money into their wallets.

According to Adrian Hetman, tech lead of the Training Team at Immunefi, the flaw lies in how Binance Bridge analyzes the evidence of transactions, and the hacker generated the message in a way that deceived the validity of the contract. That is, while the hacker has no valid claims to the funds transferred, BSC Tokens Hub proceeded with the payout as everything was valid.

Shortly after Binance was hacked, CEO Changpeng Zhao announced that validators were turned off to completely stop the network while the team investigated the attack, when hackers attempted to siphon off $560 million by minting 2 million BNB tokens and depositing them in a BNB wallet.

As a security measure, the validators will vote “in the next few days” on whether to use BNB auto-burn, a process used to keep the supply of BNB below 100 million. Binance says this will be used to recover the hacked funds. The expected validators vote will also include a bounty for catching the hackers (up to 10% of recovered funds) and create a so-called whitchat program that awards a million dollars to benevolent hackers who find and report “significant” bugs.

The sources for this piece include an article in Forbes.

Article Name
Hackers compromise Binance's BNB smart chain (BSC) in $110 million hack
Description
Hackers compromised Binance's BNB Smart Chain (BSC) and stole an estimated USD 110 million. Hackers were able to get their hands on as much as $110 million worth of coins and transfer them out of BSC, while a further $429 million remained in the BNB wallet.
Author
Obanla Opeyemi
Publisher Name
Tuxcare
Publisher Logo