If you’re interested in Linux security, kernel vulnerabilities or simply have some spare time to run some tests, this article is for you. In it, we provide an updated version of a methodology you can use to extract data from CVE repositories and create your own statistical analysis. Find out which kernel versions have the most identified vulnerabilities.

Linux kernel developers tell us that the ‘best’ Linux kernel to use is the one that comes with whatever distribution we’re using. Or the latest stable version. Or the most recent long-term support (LTS) version. Or whatever one we want, so long as it’s maintained.

Choice is great, but I’d rather have a single answer; I just want the best. The trouble is, for some people, best means fastest. For others, the best is the one with the latest features, or a specific feature. For me, the best Linux kernel is the safest one.

Which is the ‘safest’ Linux kernel?

A crude way to consider the safety of a piece of software is to see how many security issues appear in a specific version of it. (I know it’s a shaky premise, but let’s run with it, if only as a way to learn more about CVEs and how to interpret them.) Applying this tactic to the Linux kernel means examining vulnerability reports.

That’s what I’ll be doing in this series of three articles. I’ll be analyzing Linux kernel CVEs (reported vulnerabilities) to see if there are any trends that can help answer the question, Which is the best (i.e. safest) Linux kernel to use.

But wait–hasn’t this been done already?

Because either those resources and projects don’t answer my question, or they cost money.

And besides, I want to learn what a CVE is, what they can tell me about the differences (if any) between Linux kernel versions, and what the limitations of this approach is.

The process and tools

It’s pretty simple; get the data, analyze it, chart the results.

The tools are free and run on many platforms. I’ll be working on Debian Linux, and will assume you’re not fazed by the sight of a naked terminal.

Just so you know what you’re in for, here are the key steps.

First, here’s a bit of background on what a CVE is, and what a CVE record contains.

What is a CVE?

For our purposes, a CVE is a code that identifies a software vulnerability. It’s in the form CVE-YYYY-N, where YYYY is the year the ID was assigned or made public, and N is a sequence number of arbitrary length. An organization called Mitre coordinates the CVE list.

Clearly, a CVE isn’t defined by its ID, but by its details. A number or organizations look after these details, but the one I’ll use is the most well-known, the National Vulnerability Database (NVD), managed by the National Institute of Standards and Technology (NIST). Anyone can download their CVE data for free.

NIST have some simple bar charts that show how the severity of vulnerabilities varies by year. These are charts of all software CVEs (not just Linux ones), from 2001 to the present year. I want something similar, but only for Linux vulnerabilities, and broken down by kernel version, too.

Before I load and query the JSON-format vulnerability files, let me show you what’s in them. (There is a file specification schema, but it has a lot of detail we don’t need to know about.) Each NVD CVE file contains a year’s worth of CVEs (January 1 to December 31). Here’s the basic structure of a CVE entry.

The two versions differ in how they map the base score to severity. (The table below comes from the NVD CVSS page.)

Now I’ll set up CouchDB, load the data, and query it with Mango.

Run a Mango Query in Fauxton

To make this first query easy, I’ll use Fauxton, the CouchDB browser-based UI. But don’t get too comfortable with it, because in Parts 2 and 3 I’ll work solely on the command line.

The result is a list of the CVE IDs of Linux kernel vulnerabilities for all severities and kernel versions, assigned or published in 2021.

Congratulations. You are now the proud owner of a CouchDB database bulging with over a decade’s worth (or whatever you chose) of CVEs. Remember, the database contains data for all software from all vendors.

Next, I’ll add selectors for severity and kernel version, run the queries and chart the results.

Create some directories to keep track of everything.

Next, I’ll look at how the number of Linux kernel vulnerabilities varies year-on-year. To do that, I’ll add parameters using printf tokens in the Mango queries, with values substituted at run time. (Later, I’ll add parameters for kernel version, too.) To keep things quick and simple, I’ll use the CouchDB POST API to submit queries on the command line.

Run this to create a Mango query file:

Run this to create a gnuplot script in bin/1-linux-kernel-cves-by-year.gnuplot: 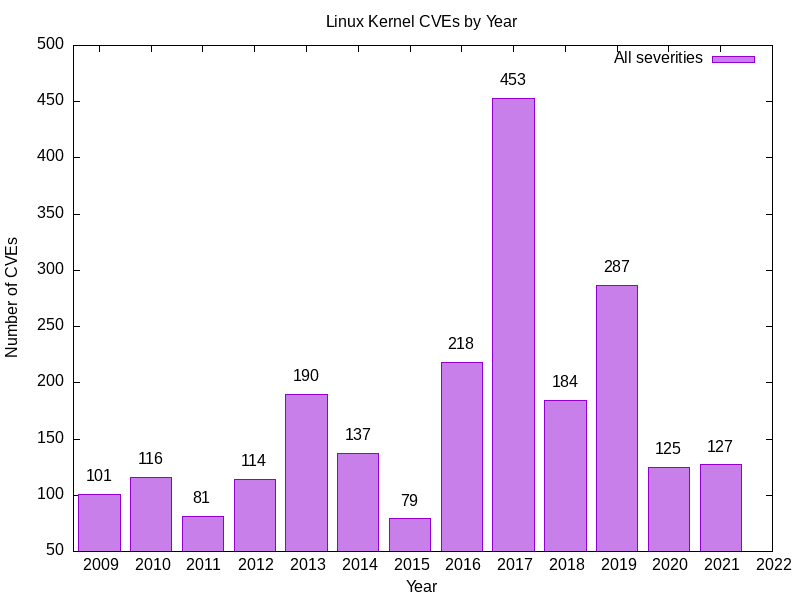 I was concerned when I saw this, so I cross-checked against other sources, CVEDetails among them. The numbers tally pretty well.

Any differences can be explained by the observations of CVE Details:

In other words, the NVD CVE data is not completely accurate. (More on this later.)

This chart shows the totals CVE counts aggregated across all CVE severities. To break the results down by severity, I will add a selector to the Mango query.

Query 1b – Linux kernel CVEs by year and severity 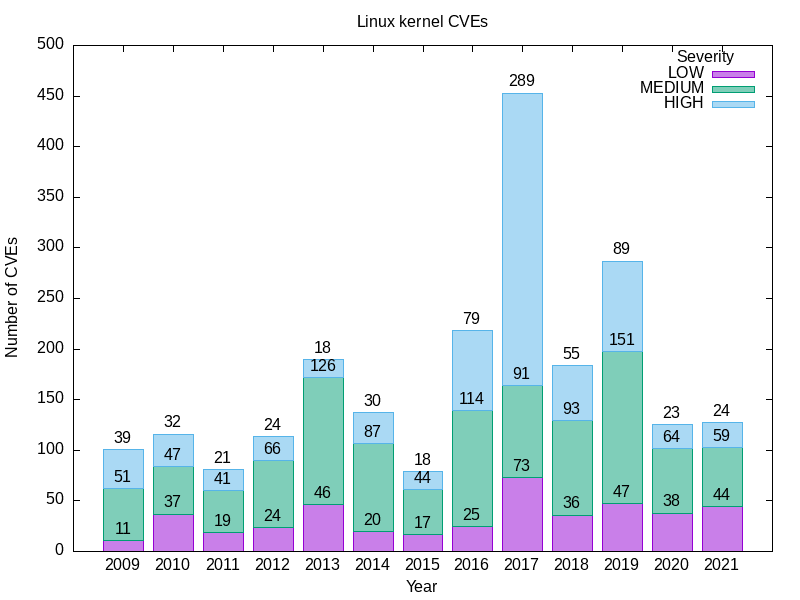 Query 1b is a sharper picture than Query 1a but no less shocking. For instance, compare the relative proportions of HIGH severity Linux kernel vulnerabilities to those before and after 2016.

It could be that many of these vulnerabilities are concentrated in a few kernel versions. I won’t know until I modify the query to select on version as well as year and severity. That’s coming next.

Here, in Part 3, I develop that core Mango query to look at how the number of Linux kernel vulnerabilities varies by kernel version.

Because there are so many versions, the queries and commands start to get more complicated, and take longer to complete. So, for now, I will only vary the year and kernel version. Severity remains a parameter, but I will query results for all severities. 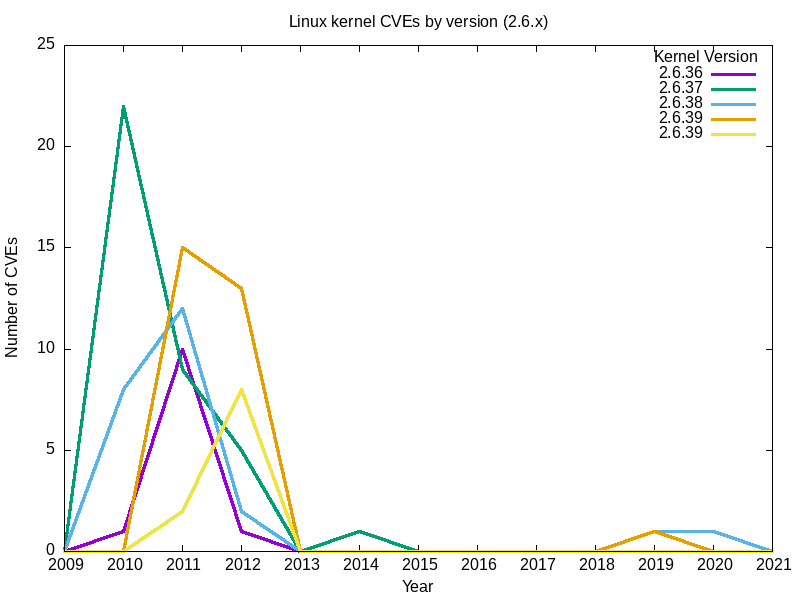 Here is a script that combines the last three commands into a single block, and uses environment variables to query the last five releases of the other major Linux kernel branches.

Save the code to a file, make it executable then run it. And wait.

Here are the resulting charts. 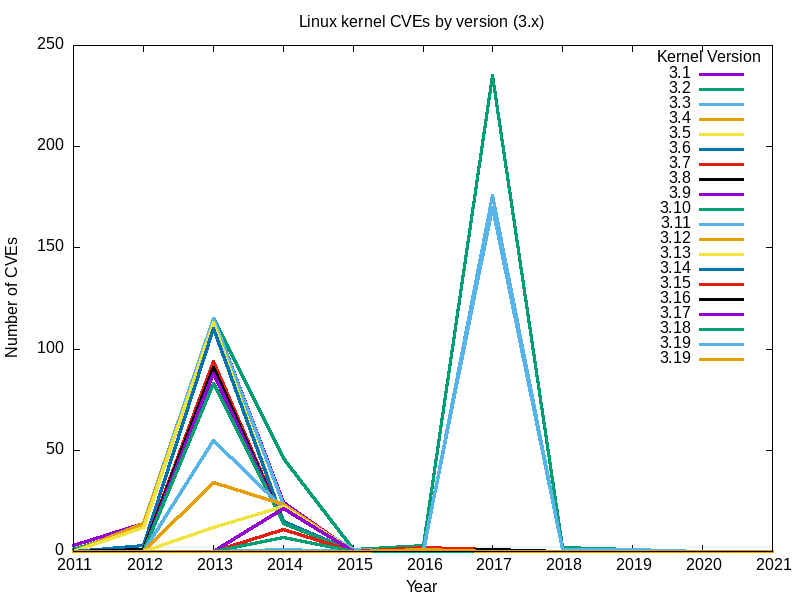 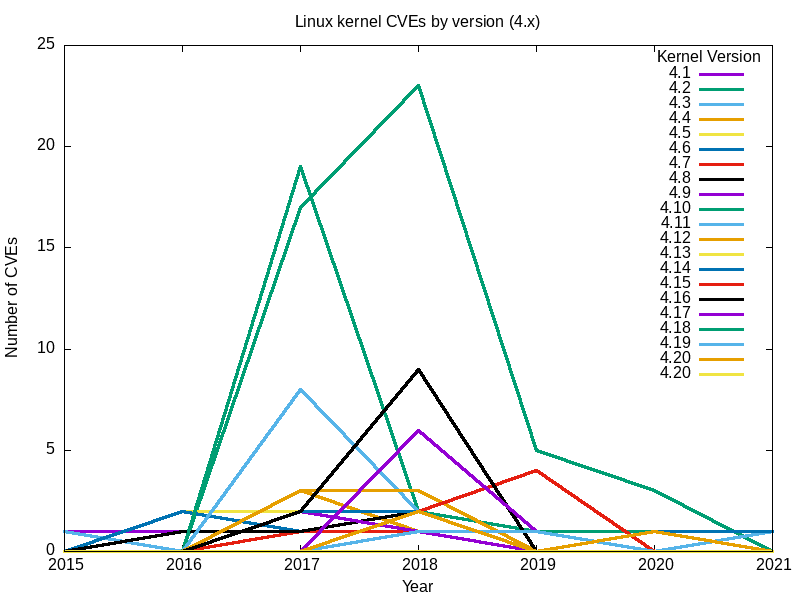 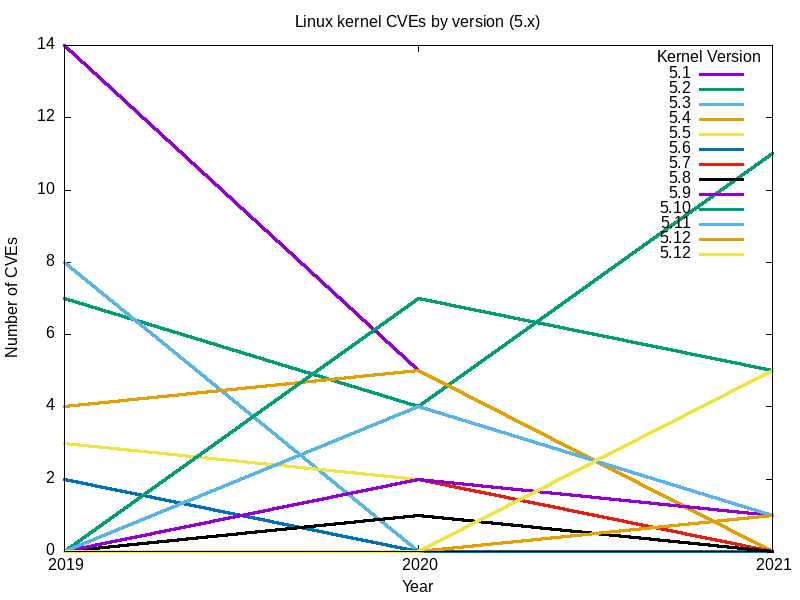