Behind the Scenes at KernelCare: How We Test Patches Before Release - TuxCare

Behind the Scenes at KernelCare: How We Test Patches Before Release 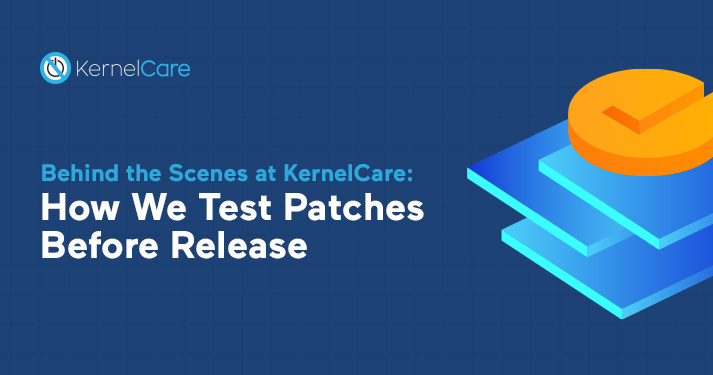 Testing is essential for any software update including patches, but it’s even more essential when changes are made to critical infrastructure that powers revenue-impacting services. Release of security updates that are not thoroughly tested may result in kernel crashes, operating system reboots, system- or service-level failures – some of these aftermaths are critical and some just unpleasant, but all of them can hurt your business and service-level agreements. KernelCare has a strict testing process every patch must go through before it’s deployed to production, and this article details how we ensure customer infrastructure reliability and uptime after patch deployments.

It’s essential that all software including the Linux kernel is patched when developers release a security update. It’s even more critical to patch as soon as possible when a vulnerability is published with exploit code. The longer you allow servers to stay unpatched, the greater the risk of being the next large data breach victim. It’s not uncommon for administrators to test and wait for a scheduled date before patching. Within this timeframe, an attacker could scan the server, find the vulnerability and exploit it.

Leaving patch management to KernelCare eases much of the overhead for administrators, but our clients need the reassurance that proper testing is done before allowing a third party to deploy to critical infrastructure. KernelCare’s patching solutions go through rigorous testing before deployment to our client servers. Our testing alleviates much of the administrative overhead in large organizations so that you no longer need several machines with the various vendor operating systems installed to ensure a clean, bugless patching experience.

Buggy code can cause several issues including introduction of new vulnerabilities. An example of why it’s so important to test patches before deployment is the discovery of a trivially exploitable vulnerability introduced in May 2020. The patch named Huawei Kernel Self Protection was supposed to offer a series of security-hardening options for the Linux kernel. Instead, it opened the operating system to possible backdoors, offered no threat-level programming, and allowed for disclosure of kernel memory. Because the patch was tested, the Linux team was able to stop it from weakening the security of the kernel. This is one example of why it’s critical to test patches before they’re installed, and KernelCare performs a number of testing types before deployment to our client servers.

To help our customers understand the high-level testing we require from our teams, we’ve detailed the process below.

Thorough testing is critical for successful deployments, and we know that bugs impact our customers. We have four tests that run simultaneously for each kernel to ensure patches don’t cause critical issues.

Before any patch is deployed, it goes through the following automated tests depending on how fast we need these patches in production and the critical level of the vulnerability:

In order to provide our clients with a stable and reliable patching service – the one you can rely onand even forget that it exists on your servers – we test each patch on each affected kernel for at least 4 hours/kernel and only release patches when we are 100% sure they will not disturb your operations. With KernelCare, administrators can not only patch their systems with no reboot required, but they also know that these patches are thoroughly tested before installation.