The IoT Surge And Live Patching At The Edge - TuxCare

The IoT Surge And Live Patching At The Edge 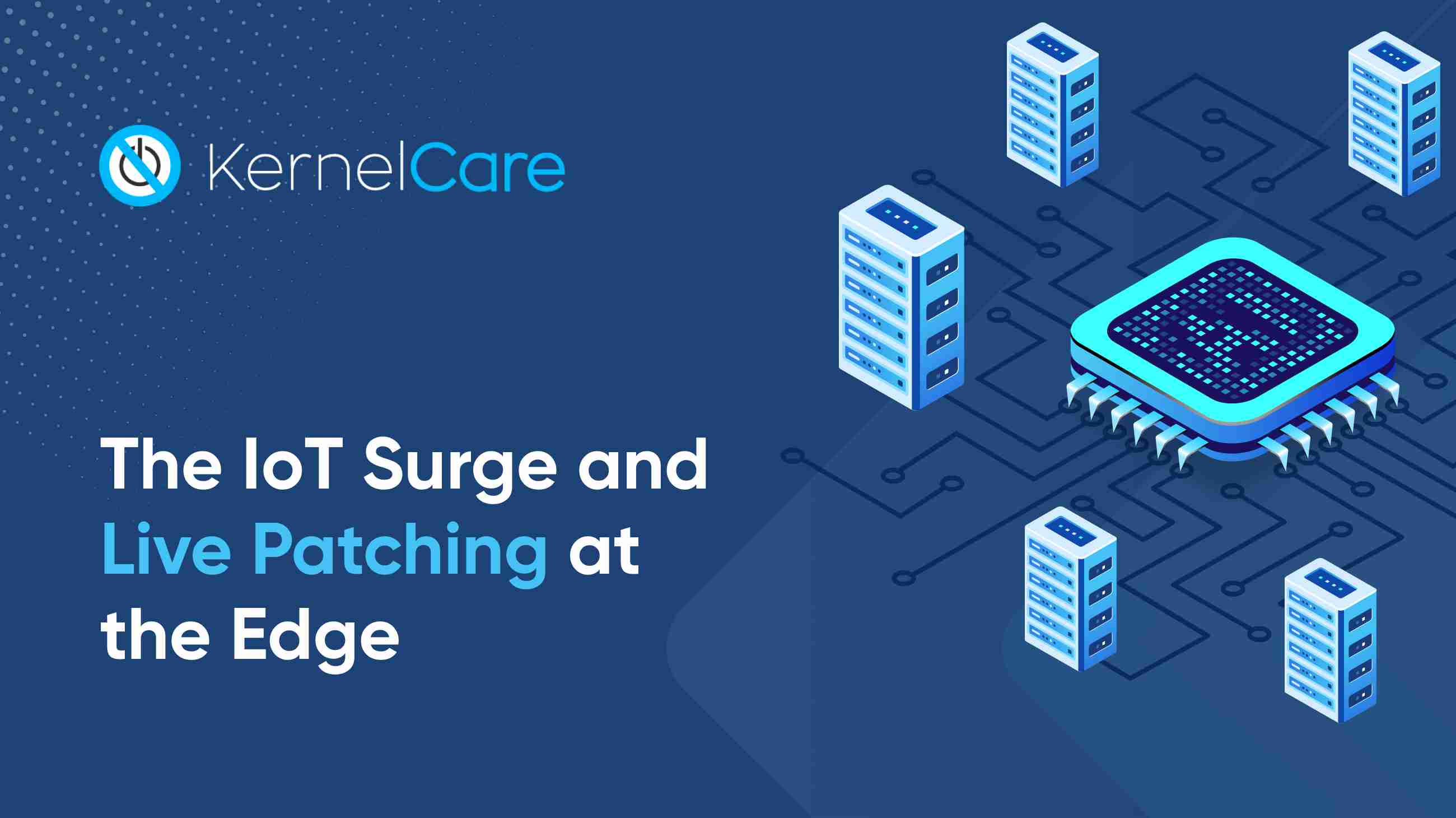 The Internet of Things (IoT) has been adopted by an increasing number of enterprises recently, and it has become an essential part of edge computing. IoT projects are being added to the enterprise because they can bring value to the business by adding an intelligence and automation capability in situations where it wasn’t available before. However, with the amount of personal or sensitive data being stored at the edge, you could be at risk for a data breach through devices in your network that are unpatched for long periods of time – if ever.

IoT is growing rapidly, but it still has a number of vulnerabilities that need to be addressed. With the rise of enterprise IoT and the security issues, technology maturity, and insufficient testing and lack of updates on insecure networks that come with it, keeping your IoT devices secure with regular, carefully performed updates is key to the health of the device.

The Rise of Enterprise in IoT

The data generated by IoT devices, while beneficial to the users, can pose a high risk for breaches. The challenges that are faced in regards to integration, security, and cost should be reviewed and planned around in detail. With this new wave of enterprises embarking on a digital transformation journey to widen their industry – specifically in the utilities, manufacturing, and automotive industries, “a lack of internal skills can then often exacerbate challenges around integration, maintenance and security, while the enterprise also suffers from a custom-build price premium.” As enterprises scale up their deployments to encompass new capabilities for a maturing market, more companies are utilising devices for automated check-outs, inventory management products, and robots. As the data is generated, collected, and analysed, enterprises are finding, it will be easier to re-engineer their processes for new business models.

Security is one of the biggest concerns for IoT device management. Since there are often weaknesses in the network communication and services of newer IoT devices, these leave a door open to hackers.

Another security problem is that a lot of IoT devices have default passwords, which, once a hacker gets their hands on a default password, they can use it on any IoT device that also uses that default. IoT devices are not usually operated by humans on the network side, so there is not a human to change the passwords manually. From an enterprise stance, not including a requirement to update the default password will leave IoT device users vulnerable to hacking – with the potential to get into the enterprise’s system.

One way to combat security issues is to manage your IoT devices properly. Understanding how the IoT ecosystems are being built, and designing your device around the management from install through its lifecycle will significantly decrease potential security breaches. When creating your device from the start, it’s crucial to build in security measures and plan for quick rollouts of live patching for those devices.

Newer technologies are exciting to consumers, but new technology is often immature, which can lead to security issues and frustration among consumers. New technology can be rolled out before it is completely perfect because one company wants to beat its competition on the release date.

Consumers will tolerate some software bugs, but these bugs can leave a system open to attacks. Vendors are expected to give consumers hardware that works exactly how they expect it to, but the “reality for IoT vendors is that they must also support software applications and connectivity protocols, both embedded in their hardware and in their accompanying mobile or web apps. The software piece raises issues around connectivity, compatibility (with hubs and various mobile platforms), security settings, and others.”

A major security issue with your IoT device is that the companies that produce them don’t do adequate testing, and software updates can come too late. When consumers put the trust of their device security in the hands of the manufacturers, they’re doing so with the belief that the manufacturer has taken all measures necessary to prevent security safety failures – and on the enterprise, this exact issue is exponentially greater.

However, with the quickly-growing market, manufacturers of IoT devices are creating and deploying devices to market before their competitors can, leaving little room for testing. Any updates that are made available are for initial bug fixes and generally not carried out through the lifespan of the device, with manufacturers instead opting to release a newer device.

These leave your IoT device with outdated software, and can potentially leave you exposed to malware attacks and hacking attempts, among other security breaches.

One of the most concerning aspects is that if an update is made, the device may send any information to the cloud. If your information is on an unencrypted connection, the update files could be unprotected, leaving you vulnerable to hacking attempts.

It’s important for IoT devices to have regular, automatic updates to avoid security issues in order to close security vulnerabilities as soon as they are fixed.

While the average user is aware of phishing attempts, malware and virus attacks, the importance of securing their WiFi network, and protecting their credit card information when online, they’re still human and can be susceptible to attacks on their IoT devices when they’re left un-updated by the manufacturer without even realizing it. This leaves the enterprises’ network vulnerable, as a hacker’s entry point can be as simple as a poorly maintained IoT device.

An example of how crucial it is to have users be aware of security issues is the Stuxnet worm. In 2010, it breached an internal network of an Iranian nuclear facility through a user plugging in a USB drive, exposing the network, and becoming vulnerable to the attack.

Hackers have found that the easiest way for them to execute an attack on your network is to find any weaknesses in the communication model. They will work to capture login credentials and communications tokens, as well as other identifiers that aren’t secure. Ensuring the data in your network is encrypted and in ‘safe’ mode prior to performing live patching updates, you’re eliminating the risk of these hackers gaining access to your network, and more importantly, the sensitive data that you have.

How KernelCare Can Help With Live Patching

As more and more businesses are deploying IoT devices, the low visibility of those systems is creating openings in the security of the network. Systems that are always connected and never updated for years, often with flawed or poorly implemented security features, are a danger that should not be ignored.

But how can you update them when the vendor abandons its support quickly after selling it? At least with a live patching utility like KernelCare for IoT, you can keep the critical system components patched and up to date, without disrupting their functionality or having to replace them during maintenance periods.

KernelCare can help on devices running supported Linux versions by live patching security vulnerabilities, thus keeping the device secure even if the original vendor is slow to provide patches – or does not provide them at all. By having live security patching for your IoT device, you’re improving the ROI, the overall security of the device and the network, and reducing the work with supporting it from the enterprise side.

From a technical standpoint, we’re able to allocate new kernel memory loads and secure the code into it, then momentarily pause all processes and put them in ‘safe’ mode while we perform live security patching. We’ll modify the original functions and jump to a new, secure code, ensuring that the old (vulnerable) code can never run, then unpause all processes and resume running as normal. You can learn more about live patching for IoT devices in KernelCare whitepaper.

While IoT devices are still fairly new, they can present a significant risk if they’re not updated or patched regularly. Vendors that are supporting a device on a network that isn’t quite mature enough and is still evolving can open their device to being quickly abandoned by users for another IoT device with different features. This then leads to a lack of support from the vendor for already existing devices. For enterprises, updating and monitoring are limited by the device’s own characteristics, while at the same time being devices that are ‘mission critical’, and cannot be stopped for maintenance and updates. Keeping IoT devices secure with regular, carefully performed updates is key to the health of the device. KernelCare can help you with live patching services – keeping your devices healthy and safe. Contact us today to see what KernelCare can do for your IoT security.