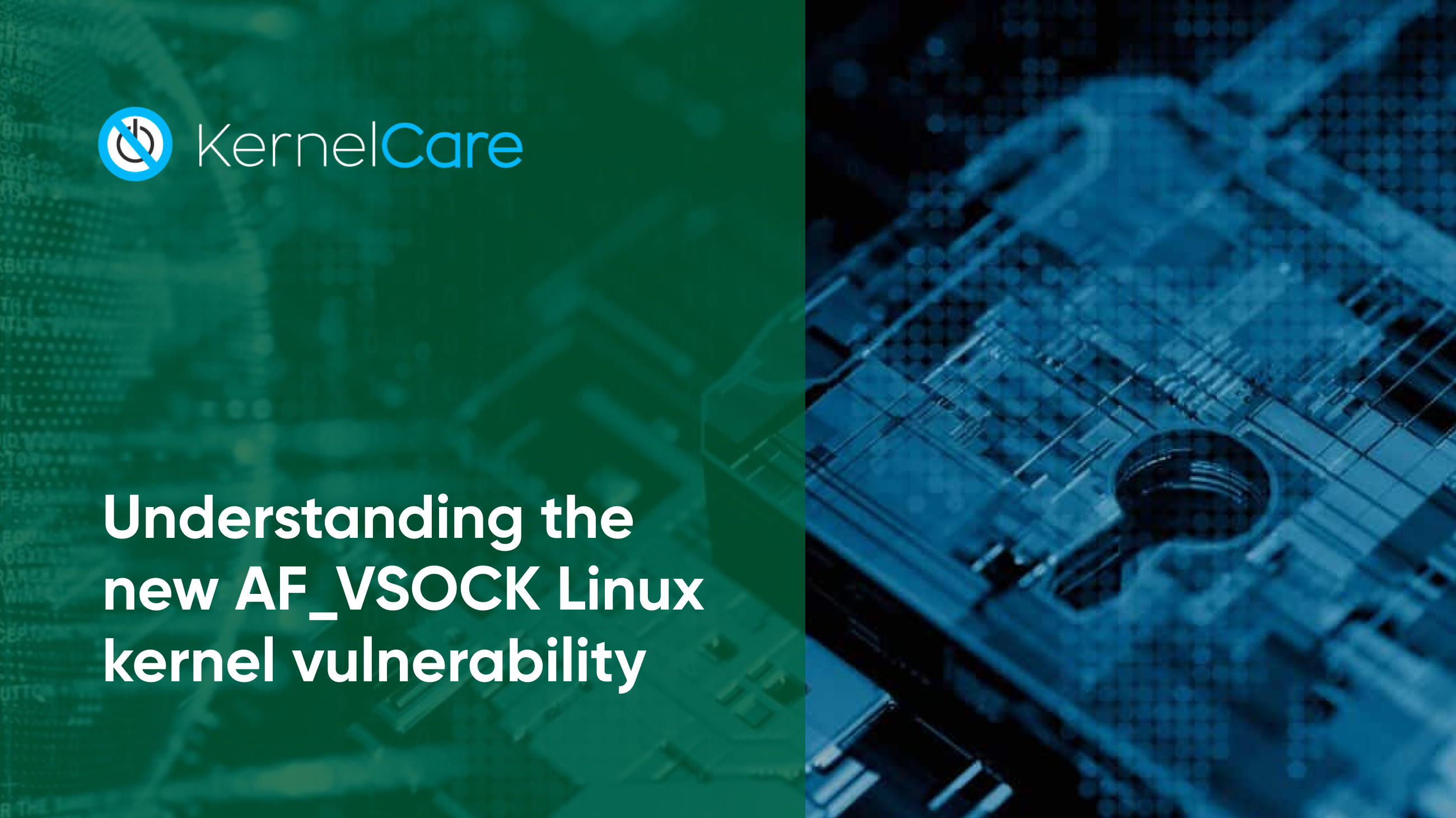 This February, a new vulnerability was reported in a relatively obscure corner of the Linux kernel – in a function that facilitates communications between virtual machine host and guest. Though just discovered, it is already listed as CVE-2021-26708.

In this article we outline the vulnerability, explain how it emerged, and point to the potential risks the new vulnerability holds.

Introduction to the vulnerability

When did it get into the kernel?

Hang on, we don’t rely on virtualization…

How does the vulnerability work?

What is privilege escalation?

By the way, what is VSOCK?

What is at risk?

Which other AF_VSOCK vulnerabilities exist?

Introduction to the vulnerability

In February, a researcher discovered that the Linux implementation of AF_VSOCK allows an attacker to launch a privilege escalation attack. The ability to do so relies on the fact that a race condition is created under certain circumstances when AF_VSOCK is called, which leads to the opportunity to bypass key security mechanisms – SMEP and SMAP.

It is interesting that, in the case of this vulnerability, the weakness is found in a function of the Linux kernel where vulnerabilities are found relatively rarely. This is only the third vulnerability found in AF_VSOCK so far, we’ll take a quick look at two others – CVE-2013-3237 and CVE-2018-14625 – later in this article.

When did it get into the kernel?

AF_VSOCK was first introduced into the Linux kernel to facilitate virtual machine communications. The code specific to this vulnerability was introduced in 2019 – it is code that implements multi-transport support in AF_VSOCK.

AF_VSOCK is included in all major Linux distributions, including for example Red Hat Enterprise Linux (RHEL) and Ubuntu, which is why both of these vendors have reported the new AF_VSOCK vulnerability as a concern.

Hang on, we don’t rely on virtualization…

It doesn’t matter. The issue lies in the fact that, even if you do not make use of AF_VSOCK in your applications, the AF_VSOCK module is included in the Linux kernel and AF_VSOCK is always ready to be loaded as soon as it is requested by a program. This autoloading ensures that the code is available whenever a virtualization host tries to communicate with a virtual machine.

A hacker can therefore simply create an application that requests a “dummy” VSOCK. By calling AF_VSOCK the hacker causes the operating system to auto-load AF_VSOCK – which then allows the hacker to exploit the new vulnerability.

So, even if you do not make use of virtualization, the presence of the AF_VSOCK module in most common Linux distributions implies that your system is vulnerable too.

How does the vulnerability work?

As we suggested earlier in this article, the vulnerability can easily be triggered by a malevolent actor when that actor puts in a VSOCK request. There are currently no live exploits of this vulnerability, but in this section, we will cover some of the key concepts around this vulnerability to help highlight how it may be exploited in the future.

First, we address an aspect that somewhat reduces the potential severity of this particular vulnerability. To be able to exploit the weakness in this vulnerability the intruder will require access to a local account. This contrasts with many other vulnerabilities that can be more easily exploited remotely.

That said, this vulnerability is still dangerous because it involves something called privilege escalation.

What is privilege escalation?

In any system, it is common – and good practice – to limit the permissions (or privileges) granted to a user. A super admin or root user for example will have broad, unrestricted permissions to execute instructions in an operating system, but a responsible sysadmin will never grant such broad access to every user – and to every application.

Instead, more limited access is granted. Good practice would mean that sysadmins grant only the privileges necessary for the user or the application to execute their duties.

However, basic privileges can act as a steppingstone. Attackers can exploit a flaw or vulnerability or indeed a programming or configuration error to gain higher (or elevated) privileges in a system. While the initial permissions for a user may be highly restrictive, through privilege escalation an attacker may be able to gain expansive access – often this might be full root access to a system.

Privilege escalation can be difficult to detect, and the best way to guard against this type of attack is to ensure that the underlying vulnerability is protected. By applying a patch, for example.

By the way, what is VSOCK?

Virtualization implies that several operating systems (the guests) are hosted on a single computer – and that these guest operating systems are managed by an overarching piece of code called a hypervisor (the host).

One way to do it would be to use the virtual networking established by the hypervisor – essentially using Ethernet and TCP/IP to communicate. However, this method is not reliable and requires the configuration of network interfaces on the guest.

That’s why VSOCK was added to the Linux kernel. VSOCK makes it easy to facilitate communications between guest and host. It can be used by user level applications on the virtual machine. It is compatible with TCP and UDP, and in Linux the protocol family is defined as AF_VSOCK.

The other key thing you should understand about enterprise-grade virtualization is that it relies heavily on processor features – virtualization must be supported in the CPU hardware, to start off with. Furthermore, to efficiently manage competing demands for processor capabilities, virtualization relies on cutting-edge processer technology, including the ability to manage workloads across multiple processors in one system.

It uses something called symmetric multiprocessing (SMP) to achieve this. In simple terms, the operating system – or indeed the hypervisor – manages concurrent processes across multiple CPUs all within one system sharing the same memory.

SMP can get complex, particularly around the access to shared data. It can happen that two or more processes try to access the same data – but that it is not clear which of the processes will be the first to get access to this data. Both processes are “racing” to get access to the data, which creates what’s called a race condition.

Race conditions can be exploited by hackers to interfere with an otherwise secure process and that is why the new AF_VSOCK vulnerability can become dangerous – the incorrect code implementation introduced in November 2019 creates the opportunity for a race condition to emerge.

Given the need to facilitate communications between operating systems, AF_VSOCK code executes at a very low level. This can create a condition where attackers exploiting code at such a low level can rapidly gain power over a system.

However, the conditions that develop because of the newly discovered vulnerability in AF_VSOCK allows an attacker to bypass SMEP and SMAP. This, in turn, opens the door to a privilege escalation attack.

There are currently no exploits in the wild and it is difficult to accurately predict the impact of this new vulnerability. Nonetheless, given the low-level operations involved and the clear potential for a privilege escalation attack, we would advise that organizations take this vulnerability seriously. A patch is likely on the way and the faster your organization applies this patch, the better.

What is at risk?

In short, and is often the case, the answer is that everything is at risk. The new AF_VSOCK vulnerability could be the entry point to a large-scale breach in your networks. By pivoting off a privilege escalation attack an intruder can gain unrestricted access to a PC, or a server.

This can be a steppingstone to much broader access: the compromised system may be in a trusted role, and the attacker could abuse these privileges to accomplish their goals.

Everyone relying on a major distribution that uses a kernel released after November 2019 right through early February 2021. This includes Red Hat Enterprise Linux (RHEL) 8, CentOS 8, and Ubuntu 20.10.

Which other AF_VSOCK vulnerabilities exist?

At the time of writing the community is aware of two other vulnerabilities that affect AF_VSOCK in the Linux kernel:

Neither of these vulnerabilities has received much coverage and there are no known exploits – but that does not mean that no exploit will be found, nor that there is no unknown exploit actively being used in the wild.

The two AF_VSOCK vulnerabilities we listed above have been patched and we expect the newly-discovered vulnerability to also see a fix in short order. In turn, the various distributions that rely on the current Linux kernel will release OS patches that ensure that the new vulnerability does not pose a danger.

However, patches need to be applied to be effective. As an organization, you must ensure that kernel patches are applied across your Linux machines. You need to do so rapidly, and consistently. Just a single unpatched machine can leave your entire technology estate open to attack.

That said, at KernelCare, we understand how difficult it is to consistently patch. Patching requires time and resources, both of which can be in short supply. Worse, patching can be disruptive as server reboots lead to service downtime and unhappy users and customers.

KernelCare offers automated patching for several Linux distributions. This live patching service does not require server restarts – instead, patching occurs without disrupting services. In other words, your organization can patch consistently – without the costs in labor, or disruption.

The relatively obscure corner of the Linux kernel in which the new vulnerability was discovered highlights just how broad and unpredictable today’s vulnerability landscape is. There is really no predicting where and when a new threat can emerge.

Nonetheless, there are tried and true methods to protect against emerging vulnerabilities. Regular patching is one clear route to continuously safe operations. Find patching time-consuming or too disruptive? Take a look at KernelCare’s automated, rebootless patching here.