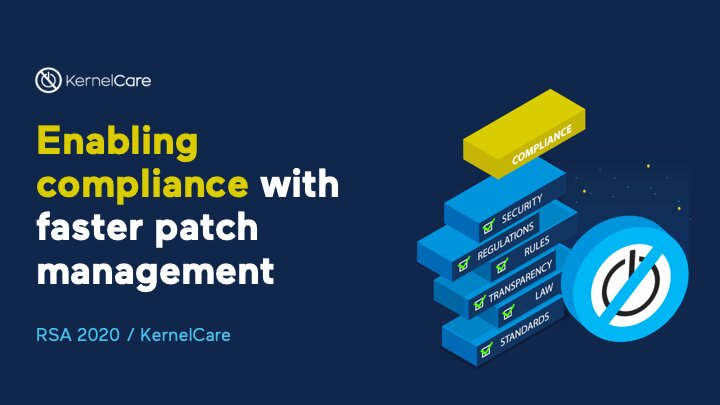 During RSA Conference 2020 KernelCare CEO, Igor Seletskiy, had a chance to share the best practices of enabling compliance with faster patch management. In this article you will find the takeaways from the speech.

For enterprises, being compliant is not a trend, it’s a necessity. Increasingly, clients won’t do business with you unless you are compliant. Non-compliance can cause severe losses, in revenue, and across the whole business.

Compliance best-practices affect all parts of your company’s business, from people and HR departments, all the way to the very core of your IT infrastructure. There are dozens of standards to choose from. 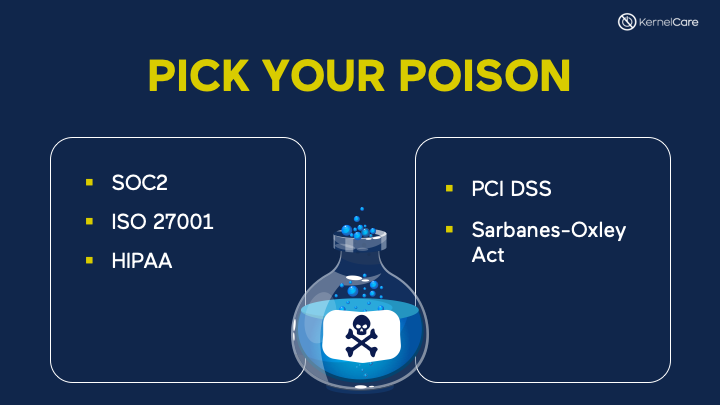 If you look at SOC2 or the Sarbanes-Oxley Act, for example, they say that “software vulnerabilities must be mitigated within 30 days“. If you’ve ever managed a server fleet, you’ll know it’s easier said than done.

Why is patch management important?

First, why is patch management so important?

We all know that outdated or vulnerable software is one of the main causes of security breaches. Here are a few examples to remind us of this fact:

This is just a few of the many cases that help explain the importance of patch management. The problem is that only the big names and big data breaches make the headlines. To see what I mean, take a look at privacyrights.org. They have a spreadsheet with over 9000 cases, and that’s only for the US. Imagine all the other unreported cases in the rest of the world.

So, we should all know that there is a need to patch vulnerable software in 30 days after a vulnerability becomes public. An essential IT security practice is to scan for vulnerabilities and then patch them, typically via a patch management tool.

Perhaps you’ve heard of some of these vulnerability scanners.

Such tools make vulnerability management much easier. They can even find and patch vulnerabilities for you, which really helps security and operations staff. Scanners detect and classify system weaknesses, prioritize fixes, and can sometimes help predict the effectiveness of countermeasures.

Typically, the target attack surface is looked up in a database of information about known security holes, including such details as anomalies in packet construction, and paths to exploitable programs or scripts.

Automated patch management tools like these take the pressure off system administrators. If you speak to any, they’ll tell you how great it is to have something that automatically downloads and installs patches across different devices. Linux server patches are deployed more quickly and more reliably.

Enterprises typically think about using automated patch management tools when their Linux server fleet grows above 40 or 50. At that number, IT departments get stretched so thin with manual patching that they end up deploying only those patches with urgent or high priorities.

Linux patching involves more than a simple update of the source code of a kernel. These patches include updates that ensure system security, minimize errors, and introduce the latest features. But most importantly, proper patch management can greatly improve an enterprise’s security, by addressing the vulnerabilities in its software and operating systems.

While most updates are as easy as running a Linux command, it’s not just about the technical aspects. There are also organizational issues. You have to keep track of what needs to be updated, and understand the impact of the updates. Updates must be tested and staged, and the change has to be communicated across departments. 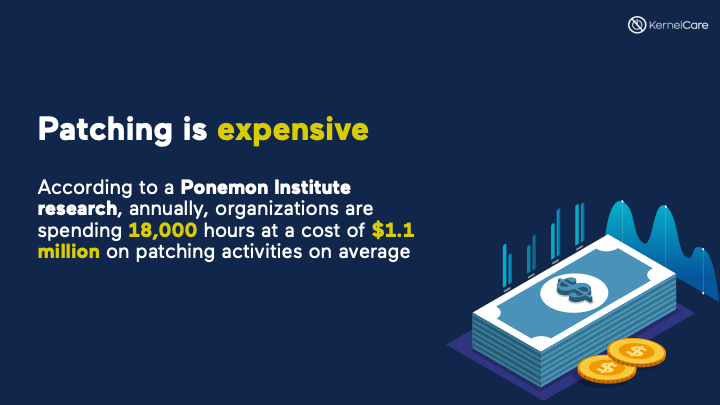 According to a Ponemon Institute research, annually, organizations are spending 18,000 hours at a cost of $1.1m on patching activities on average. Despite this effort, many have seen a reduction in the time it takes for an exploit to appear in the wild for a given patched vulnerability. Without implementing strong patch management best practices, Enterprise will waste time and risk leaving the door open to attack.

Also in that Ponemon study was the fact that almost two thirds of cyberattack victims said that applying a patch would have prevented an attack. And a third said they knew about the vulnerability before the attack but did nothing. Scary.

So clearly, a solid patch management process is an essential part of a mature security framework. The faster you can apply the right patch to the right application, the more secure your environment will be.

99% types of patching doesn’t require system reboot. But when it comes to Linux Kernel patching, 99% of organisations apply patches the same way: by rebooting their servers. Because rebooting a server fleet is a headache, people put if off for as long as they can. Which means patches aren’t applied as early as possible. This gap between patch issue and patch application means risk, and also malpractice.

Additionally, most enterprise companies can’t go offline, making it a challenge keeping system software up to date. Enterprises deal with it by developing maintenance windows or reboot cycles and following them rigidly. These practices take a lot of time to plan, and a lot of resources to implement, and they still end up with a system reboot and the start of another reboot cycle. Here’s a typical patch process.

But why is this process so involved? What’s the real reason behind it? I’ll tell you. It’s because:

KernelCare customers have fully-patched servers that have been running non-stop for 6+ years, and it supports all major Linux distributions. It works in the cloud or on-prem, behind firewalls or air-gapped environments. There is out-of-the-box support for vulnerability scanners and patch management solutions, and for custom kernel patching.

Here is how it works:

KernelCare has helped companies with more than 300 000 servers to achieve their SOC2 compliance status. Here’s a few of them.

We provide flexible pricing for different server fleets, a free trial for everyone, and bespoke Proof of Concepts for clients with custom infrastructures.